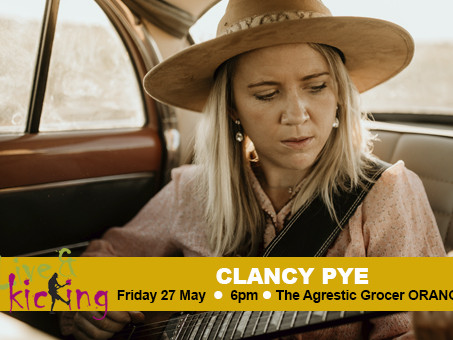 Clancy Pye was raised on a farm in Oberon surrounded by a musical family with country music blood pumping through her blue denim veins. Picking up her first guitar at the age of six, she has spent most of her life performing in front of audiences ever since. From her early days with Brother Mickey as a member of the Party Pyes to countless nights holding her own on stages around the Central West and plenty of other towns, including Tamworth. She is no stranger to music festivals including CMC Rocks & The Gympie Muster. She’s even performed at international festivals in Canada Big Valley Jamboree & The USA CMA Fest, Nashville , accompanying her brother Mickey Pye Star Maker winner 2015.  Clancy has been a finalist for Star Maker previously and is a Grand finalist in 2022 Tamworth Country Music Festival.

Clancy has been writing songs for a long time and in 2020 she released her debut self-titled EP. Her first two self-penned singles “Get Lost” & “Heaven Can’t Wait” both debuted at #1 on the iTunes Country Singles Chart & drew extensive support from new fans & radio stations nationwide.

Clancy is poised to record her first full length album. She has been crafting with great devotion at her song writing over the past 18 months with a 100 plus songs to now feast from.

So come and take your seat for this Meet the Songwriter banquet of musical delights Clancy Pye will serve up at The Agrestic Grocer session of Original Live Music. You won’t be able to live stream or download it, you’ve gotta be there to experience it. Book your tickets now.

Arts OutWest is pleased to present in conjunction with The Agrestic Grocer in Orange a series of Live & Kicking Meet the Songwriter sessions featuring the Original music of artists from The Central West. Live & Kicking gigs are supported by the Australian Governments Live Music Australia.