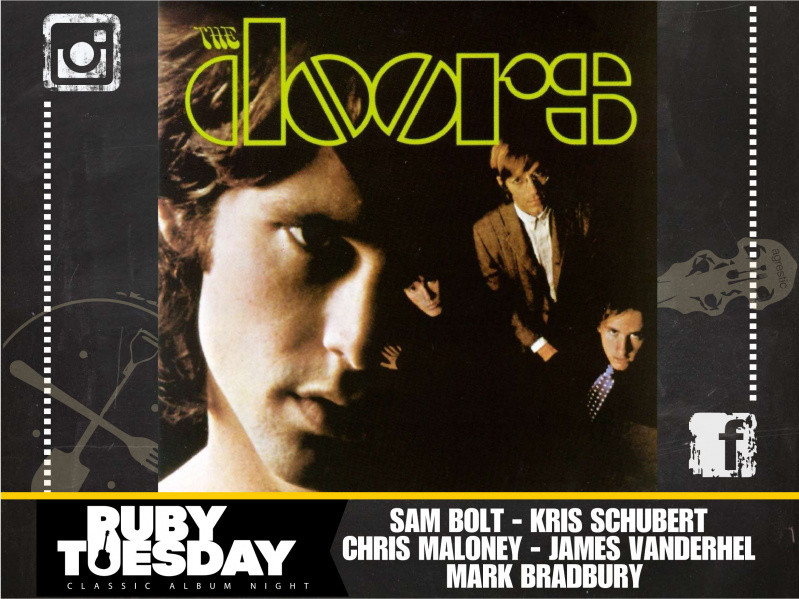 Performing The Doors’ seminal self-titled debut album is The Lizard Kings,
a Bathurst-based tribute to the era-defining 1960s rock band.

Released in 1967, The Doors’ ground-breaking debut took America by storm,
introducing unsuspecting audiences to the Hammond organ mastery of Ray Manzarek,
the jazz-infused drumming of John Densmore and the flamenco-inspired guitar of Robby Krieger,
providing the perfect psychedelic blues backdrop for the unpredictable,
shamanic force of nature that was Jim Morrison.

The album was driven by the breakthrough success of lead single ‘Light My Fire,’ and also features the classic hits Break On Through (To the Other Side), Soul Kitchen, Alabama Song (Whisky Bar) and the 11-minute epic The End.

After two SOLD OUT performances at The Victoria Bathurst last year, The Lizard Kings are bringing their high-energy show to Ruby Tuesdays for the first time!

The Lizard Kings are:


‘Is everybody in? The ceremony is about to begin….’

The Agrestic kitchen and bar will be open, dinner is served!

We have 6 beers on tap all brewed on-site at Badlands Brewery. We also have a great selection of local wines, ciders
& spirits. The evening doesn't run too late, so work/school the next day is a breeze!